How to stay warm

Winter winds have already begun worming their way through the knarled wood of the ancient sash windows up at the manor house. To make matters worse Benson recently informed me of the increase in the costs of logs from the local woodcutter, which suprised me as I assumed Woodcutters died out once fairytales had stopped being told. I didn’t know woodcutting was still a viable business, especially in Thanet, if anywhere was ever going to live up to that line about ‘Tree Museums’ from the Joni Mitchell song then surely we’re living there.

To add to our woes i hear that some rather mean minded executive types in nasty shiny suits have decided that a few Gazillion pounds profits isn’t quite enough to satisfy their cravings for all things diamond encrusted. I am of course referring to the top dogs at the energy companies, a band of individuals whose moral compass long since broke, probably in an avalanche of gold ingots.

They then have the nerve to attempt to throw us off the scent by suggesting that it’s all to do with the wholesale price of energy and of course the green subsidies that they say should be cut, thus reducing our bill (And upping their profit). So according to them we shouldn’t worry about finding ways of creating renewable energy or investing in a cleaner future. As we wouldn’t want to upset the shareholders would we.

Sorry that all sounds a bit lefty doesn’t it, we can’t have someone being a bit lefty of they’ll be accused by the popular press and Con/Libs of being a Socialist, a Stalinist or even a Commie – which makes it all the more gobsmacking that the government have chosen to have the first new nuclear power station in Britain in a generation built by a consortium of French Socialist state owned EDF Energy and Communist China backing.

It doesn’t really say a lot for our free market capitalist system when we wholly embrace the idea that state ownership of energy actually manages to work for other countries.. It says even less that we are willing to accept Communist China investment in our own infrastructure.

French energy prices have risen in the last year (by about ten percent), but on average French prices are around 15 – 20% cheaper than UK tariffs. And who gets the profits? The French population of course as the state owns the Energy companies. Recent polls suggest that around 60% of the UK population agrees that Energy should never have been sold off to the highest bidder but should have remained as state owned.

The argument for public ownership has always jiggled around with the idea that private ownership is much more efficient, with a better service for less cost. This idea has been shown to be absolute tosh on every level. From railways, where state subsidies on the rail network alone have doubled since privatisation, to water companies which were privatised in 1989, yet to this day are still losing 25% of the total water distributed to leaks.(German state owned Water companies have a much reduced 10% loss) In 2006 Thames Water was fined after losing 900 Mega Litres per day for three consecutive years without any improvement – a state of affairs that resulted in a lack of profit you might assume. No, not a bit of it, that year Thames Water declared a 31% rise in pre tax profits to £347 Million. Water companies have since posted pre tax profits of around £2 Billion pounds with £1.5 Billion being paid out as dividends. That’s whilst you water bill has risen by approxiomately £64 per year for a service with virtually no overall discernable improvement. You might argue that there has been definite water improvements locally from the days where sludgy grey sand on Joss Bay made making sandcastles a rather sloppy smelly experience, and yes that’s sort of true (Although they still can’t manage to stop discharging raw sewage at times). But many of our water companies have relied on government subsidies to fund major projects, whilst making huge profits and paying out dividends.

The Energy companies all but stopped investment in future energy production as soon as they got their sticky little mits on the Booty, they’ve since pretty much created a monopoly where shopping around for a better deal has become a near pointless exercise as prices have merged into one average price controlled solely by the ‘Big Six’. Whilst profits, dividends and golden handshake payouts have reigned free just as the cost to you has skyrocketed off the chart nearly doubling over the past seven years. And yes, just like the water companies they go cap in hand looking for government subsidies every time there’s a project that needs completing.

What can you do about it?

Well here’s my top tips for a cheaper warmer winter:-

1. Threesomes. Look it up on the Internet thingy. All that extra warmth at night from another body, if only we could harness the friction.

2. Knitting. Whilst your loved one (Male or Female) is clacking away with their knitting needles, quietly pop down the pub. Its warm down there.

3. Set fire to stuff. We live in a throwaway society apparantly. So don’t throw it out – burn it. Old sofa’s, Broken I-Pads, your collection of ‘Only Fools and Horses’ videos and back issues of ‘Build the Tower of Babel in five hundred and sixty parts’. They can all be burnt – though you might want to open a window to let out the poisonous fumes.

4. Gin. There’s always Gin. Just make sure you drink it in bed.

5. Artichokes. Coupled with an as yet undesigned contraption that harnesses the explosive wind formed from these starchy trouser trumpet inducing tubers and hey presto your gas bill will be as light as a balloon filled with methane.

6. Neighbours. Everybody needs good neighbours. Why use two houses when one will do. Overwinter with old Mrs Huggins. Sure, she smells a bit like old biscuits and ‘Vim’, but that three bar electric fire is enough for two

7. Move south. The Isle of Wight is about as far south as you can get in this country. It’s even possible that their energy bills are much cheaper over there considering most of the place is stuck in about 1955.

8. Loft lagging. It works for lofts so why not for humans. One roll is all you need plus two bungee cords. Simply wrap around the body and hold in place with the magic bungees. Youll be toasty in no time and invunerable to damage when falling down the stairs.

9. Cats. You know that weird old biddy down the road with the thirty cats? She’s onto something there. It could get a bit niffy but you’ll be warm at night with thirty moggies fighting for space on the duvet.

10. Menthol and Eucalyptos. When we were nippers, we were so poor, Old uncle Joe would suck on a ‘Victory V’ and we would all sit round his toungue.

It were a grim day on the Foreland, the clouds had a heavy dull greyness about them, you could feel the weight of the water in the heavens about to download onto the waiting heads of those gathered to hear the latest news from head office.

‘It costs a lot of money turning sewerage into something non-icky’. Said Mr Said a spokesperson for a local utility company somewhere in Northforelandshire

“We’ve had a tough year. That money you give us each month via direct debit; well it just ain’t enough to cover costs of turning doings into non-doings. What we need is an increase in earnings before we can make a hole in ground any bigger, and as for the pumps, well the crossbeam is forever going out of skew on the treadle and badly needs replacement but that’s far too technical for people like you to understand, these things cost money y’know, and money is sorely lacking in the water supply business’. Only last month our chairman had to make do with the smallest of brand new Jaguars to ferry him from one meeting with shareholders to the next, and those meetings were held in only the lowliest five start hotels in Dubai and Hong Kong, very meagre rations indeed, i think you’ll all agree.”

At this point one scoundrel from a local village rudely raised their hands in the air, interupting the flow of interesting and informative information emitting from the humble representative.

The gentlemen in question was a Mr Higgins from Broadstairs “Excuse me” said the rude serf. “Didnt you make about a Gazillion Billion pounds profit just the other year?”

“In answer to that Ill informed question” Mr Said retorted “Don’t be a ridiculous buffoon, it was but a meagre one hundred and twenty six million profit, nowhere near as much as you suggest; Guards, take that man away and drown him”

“But my lord” replied the gruff, unshaven and sweaty looking six foot lackey in the grubby overalls. “Water costs twenty quid a bucket now, can’t we just pump him out to sea with all the other crap, y’know, like we normally do”

“Good point; take that man away and pump ‘im out to sea”

“Anyway, where was I, ……Ah yes, it looks like a fine drizzle is setting in ladies and gentlemen, Er, Im afraid i’ll have to retire inside now as, er, we’ve got some, err, terribly important paperwork to complete” And with that Mr Said dissappered to within the inner sanctum of North Forelandfordshire.

Meanwhile, Somewhere on a beach

Miss Dowra and her brave fellow Clancy are picnicking on a beach, having already parked their sign-written van on double yellows,……… it’s almost as if they’re waiting for something.

“Clancy, Oh Clancy, wherever are you Mr Clancy” ventured a pretty young thing searching high and low for her beau.

“Worry not your pretty little head Miss Docwra, I am a coming to see you now” came the firm and steady reply from a wirey yet muscular chap wearing a flowing white shirt with braces, revealing a triangle of firm toned chest.

“Oh Clancy, There you are, we’ve just had a call from a Mr Said, he warns us to be on the lookout for anything afloating past, he says we’d better do better than last time or it’s a horsewhippin’ for us both”

“Not again Miss Dowra, dont you pay that man no nevermind, nobody ain’t touching a pretty hair on your head, now get those thick rubber gloves on and brink yer bucket, there’s doings to be collected”

“Just wait but a moment Clancy, there’s another call coming in from Mr Said”

,….Hello, what can i do for you sir, it’s Miss Dowra here……..What? Stop what we’re doing and go home? Why sir, we surely will, we’ll make a long weekend of it, maybe go to the beach and enjoy the great British summer by the seaside, though not round here, there’s crap all over the beach y’know”. And with that she hung up.

“But Why Miss Dowra, why on earth would he make us do a cotton-pickin’ thing like that”

“He says, dish out some hosepipes and buckets to the local serfdom, not only can they clean it up, but we can charge them for the water they use doing so now the meters are installed; Oh happy days Clancy”

“Happy days indeed” said Mr Said to another sullen employee as he gave the pump another kick….Just as the rain got heavier

Just for those of you who need a reminder about what goes in which bin / bag / box. 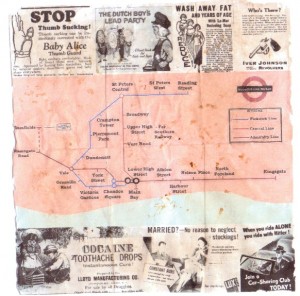 Remember this? Ooow this caused us a bit of a headache after quite a few people took the whole thing a bit seriously. Personally we thought that the adverts around the edge of the underground map might have helped to ‘Give it away’. Although the worrying thing is – those adverts were for real once.

Gentlemen, don’t forget:- When you ride alone, you ride with Hitler.

And ladies:- MARRIED? – No reason to neglect stockings!